A Rose By Any Other Name...


I read in a book once that a rose by any other name would smell as sweet, but I've never been able to believe it. I don't believe a rose would be as nice if it was called a thistle or a skunk-cabbage.
-Anne Shirley, Anne of Green Gables


Today I am the first in choosing a question and getting things rolling again for the brand new but mostly old - blog chain. This is the question I came up with:


What's in a name? What if Harry Potter had been Larry Snotter? What if Edward was Jacob and Jacob was Edward? What favorite books had character names that you loved or hated? And how do you come up with your own character names?

This whole subject of naming and what's in a name has been on my mind lately because of a certain little guy who entered my life a few months ago. 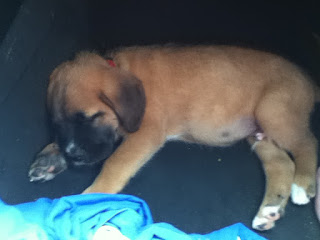 This is the puppy we brought home in early July. He was only seven weeks old. He was the cutest damn thing you've ever seen - I mean just look at that picture.

The only thing we knew about him then was that he was going to get bigger. A LOT bigger. His mom was a St. Bernard and his dad a Great Dane. On the ride home we also found out he got carsick. We actually found that out 3 times on the way home. It was a long ride home.

This wasn't a lot to go on for naming purposes and so it took us a while to settle on a name. By the end of the first day we had it. We named him Copper for his pretty fawn coloring and for The Fox and The Hound movie, which was a favorite of my husband's when he was growing up. 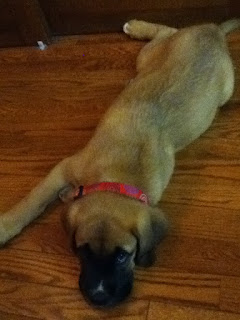 Time passed. Copper got bigger. On August 26th my husband and I celebrated our seventh wedding anniversary. Like most people who have been married for seven years, we had no idea what to get for each other. Using the power of Google we looked up the list of traditional anniversary gifts for a seventh anniversary, and they were... copper and wool. Yup, Copper. It turns out we had already given ourselves the perfect anniversary present without even knowing it. 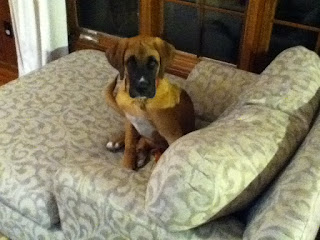 So, that little bit of Kismet is what made me start thinking about names. About how names seem to fit certain people just perfectly, while others change your perception of what a name means. For example, prior to Twilight I'm not sure that many people would've connected the name Edward with  a guy who is sparkly and dangerous.

For ANOTHER LITTLE PIECE, I wanted to give my heroine a distinctive name. Not just a first name, but first middle and last that seemed to fit together as one whole piece. I took my inspiration from the TV show, Veronica Mars. This was a BRILLIANT series (well the first two seasons, and the last episode of the third season, anyway). I highly recommend watching it if you have not already done so. And if you do watch it, you'll notice how often the characters call Veronica by her full name. According to show creator, Rob Thomas, this is because the two names "just sound great together" and "rolls of the tongue". That's what I wanted when I gave my character the name Annaliese Rose Gordon. Maybe not quite as snappy as Veronica Mars, but it did what I wanted it to do.

And where did those three names come from? I stole the middle name Rose from my sister Amanda. I honestly can't recall where Gordon came from... But Annaliese (pronounced Anna-lee-suh) was a name that my husband and I had on the short-list for our second child. We ended up naming her Zoe instead. A good call by the way - she is DEFINITELY a Zoe. And that left me with a wonderful name that I needed to use somewhere - at the time I had a new work in progress where it fit just perfectly.

Okay, that's it for my time on the blog chain. But there's still more naming fun - to see how the rest of the chain deals with the name game, make sure to check out Sandra's blog tomorrow.

Posted by Kate Karyus Quinn at 7:00 AM