Okay, the reason for the title of this post will become clear very soon, but first I wanted to go off on a tangent about, well about the title of this post. So I have heard the phrase "chillin like a villain" many times, but I didn't actually know what it meant until just moments ago when I thought "Hmm, maybe before I put that phrase on my blog I should Google it and make sure it doesn't mean something dirty or bad that I totally don't intend at all."

And from another helpful poster at the same site, "It first appeared on the saturday morning cartoon Batman, where Batman approaches Freeze and Mr. Freeze says im chillin like a villan, hence why he was chillin (literal definition).
Batman: Freeze what are you doing?
Mr. Freeze: chillin like a villan"

So the next time someone asks me how I am doing, I could totally answer that I am, "chillin like a villAIN. I won't though because:

A. It would be embarrassing for all involved to hear those words coming out of my mouth.

B. If I was a villain I would not be chillin at all. I would be freaking out that I was going to get caught or that the other villains were going to kill me, or that my latest evil plot would blow up in my face (if this plot involved explosive devices then this worry would be literal). Of course, I could twist the phrase and respond, "I am chillin in a way not at all resembling the way I would feel were I a villain" but that is clunky, ruins the rhyme completely, and doesn't at all alleviate the problem of point A.

For now let's leave chillin like a villain as the title of this blog post, and speaking of this blog post Amparo from the blog chain has brought us a wonderful topic dealing with... villains.

Since Valentine's Day is around the corner, I think it's only appropriate to pay homage to those we love. But instead of our better halves, family members, and friends, this blog chain will be all about loving the haters: write a love letter to your favorite literary villain/villain-ish character. It can be short, long, serious, funny. You can use song lyrics or poems instead. Choice is totally yours :)
Okay, my villain isn't literary, but I really truly love him - and I think that's the important thing here. So no more pantsing around - here it is:

In pictures and in your own words, here is why I love you.

Your ability to communicate without words. 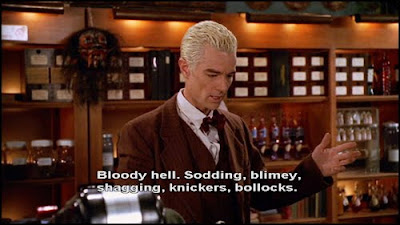 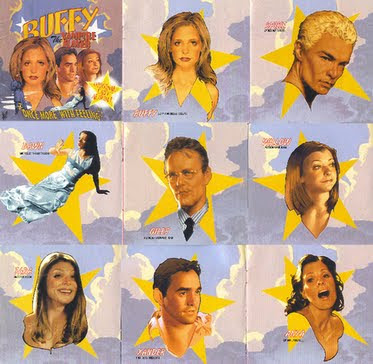 Your part in the musical episode. 'Nuff said.

"Do you know what I found worked real good with Slayers? Killing them."
Season 2

Your villainy. Yeah, you were a truly bad, bad guy. That changed in later seasons, but in the first few - you were no good. And in later seasons it was so much fun watching you becoming a better man... even though you were kicking and screaming the whole way.

Cause you told it the way you saw it - bullshit free.

"Dracula? Poncy bugger owes me 11 pounds, for one thing"
Season 5

Cause you know Dracula... and Dracula owes you 11 pounds. Hee.

"You listen to me. [Kneels in front of her] I've been alive a bit longer than you, and dead a lot longer than that. I've seen things you couldn't imagine, and done things I prefer you didn't. I don't exactly have a reputation for being a thinker. I follow my blood, which doesn't exactly rush in the direction of my brain. So I make a lot of mistakes, a lot of wrong bloody calls. A hundred plus years, and there's only one thing I've ever been sure of: you. [Buffy looks away; he reaches toward her face] Hey, look at me. I'm not asking you for anything. When I say, "I love you," it's not because I want you or because I can't have you. It has nothing to do with me. I love what you are, what you do, how you try. I've seen your kindness and your strength. I've seen the best and the worst of you. And I understand with perfect clarity exactly what you are. You're a hell of a woman. You're the one, Buffy."
Season 7

And mostly because you can make one hell of a passionate speech.

That's it from me - keep following along with this blog chain to find more villainous love notes, and if you have a minute leave a comment telling me who your favorite villain is.
Posted by Kate Karyus Quinn at 2:49 PM 4 comments: