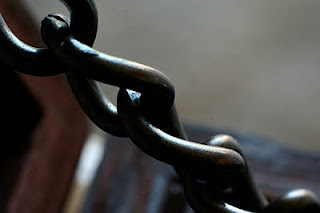 After months away I am back on the blog chain. This time around the topic comes from Sarah who asks:

How did you discover your particular voice as a writer?

Good question, right? But a hard one too. Voice is one of those writing things that is particularly elusive and just plain difficult to pin down. Unlike dialogue, description, or characterization it's not an element that you can separate out and set it in a neat little box by itself so that you can poke at and study it. This is because voice runs through all of these things, holding them all together and (hopefully) setting your writing apart from everyone else's.

So, how did I find my voice? I don't really know, it's just kind of there when I sit down to write. For me, it's kind of a mixture of both my personality and my experiences, diluted a bit by all the words of other authors that I've read and then blended to a smooth consistency so that it can be spread onto the page. Kind of like Grey Poupon, but less French.

Maybe by breaking down some of the elements that make up my voice I can have a better sense of where they came from.

At the top of that list is my sarcastic, little bit left of center, and sometimes dark sense of humor.

A large part of this can be traced directly to my mother. When my older sister and I were little kids having a bath, she told us that she had to run downstairs for some carrots to put in with us, and then she would cook us up for a nice stew. I was two. I thought she was serious, and I started crying. My mom says she felt bad as soon as the tears started to flow, but I have my doubts, especially since I have heard this story many times and every time she thinks it is hilarious.

I love writing dialogue and it is always the part of writing that comes the easiest to me. This can be traced to riding the bus. Yes, the bus. From kindergarten to eighth grade I went to a Catholic school, but we rode on the same buses as the public school kids. This meant that in the afternoon the buses would pick us up first, and then go to the public school to pick them up. This also meant a lot of time on the bus.

Lots of staring out the window at scenery going by.

Lots of not talking to kids who I didn't know and was too shy to be friendly with.

Lots of making up imaginary conversations in my head where I always had the most awesome thing ever to say, and everyone was so impressed and loved me and wanted to be my best friend.

I tend to write long sentences. Maybe you've noticed. It's not something I do intentionally - in fact, I intentionally try to do the opposite because the feedback I most often get from crits is that sentences the length of a paragraph can be confusing, annoying, and tiring. As much as I try to beat back the long sentences, sometimes I just can't. When something feels like one thought I just can't bring myself to chop it up, orphaning it's lesser parts and forcing them to hold their own in a completely separate sentence of their own. And as much as these endless sentences might be seen as a flaw, they are also - for better or worse - part of my voice.

So, what about your voice? Where did you find it? And do you feel like it is something you consciously developed or that originated more organically?

For more on this chain check out Rebecca before me and then Amanda who will be up next.
Posted by Kate Karyus Quinn at 3:41 PM 13 comments:

This is a blog about writing, and writing is about words. As writers we put words together and then sometimes pull them back apart, trying different combinations we create little worlds out of nothing but words - the ultimate Lego set.

So, it makes sense that most of our inspiration comes from reading other people's words, and I'm sure most of us could wallpaper entire rooms with the black and white pages of prose that have inspired us.

Today though I am thinking about how visuals -completely devoid of words - have inspired me. Specifically, I am thinking of the new opening sequence to the HBO show Big Love. My husband and I have been fans of this show since the beginning, and each season it just gets better and better.

However, my husband never liked their opening title sequence - he thought the whole thing was too "on the nose", and while he had a point - I liked the song they chose and the way it told a mini-story in it's minute and a half running time. Much like the cover on a book - it set the tone.

Now in it's fourth season that just started a few weeks ago, Big Love has a new opening and all I can say is WOW. Yes, all caps. It is that good. Visually it is like a chocolate layer cake for the eyes. Rich, complex, and so good I don't want to stop eating - or in this case watching - it (Not the best analogy, I know, but I am on a trying-to-lose-the-baby-weight diet and chocolate cake that I cannot have is a bit of an obsession with me right now).

This is without a doubt the best opening title sequence ever, and I am officially obsessed with it.

Now I don't know exactly how this will inspire me. All I know is that it's seared into my brain to the point where it's playing on the backs of my eyelids and that somehow, its influence will seep into my writing somewhere along the way.

So, what's inspired you lately? What do you think of these two very different openings? And are there any opening sequences for TV shows that you absolutely love?
Posted by Kate Karyus Quinn at 3:02 PM 6 comments: 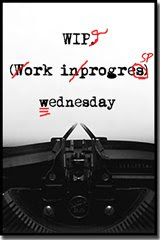 Wow, sitting down to write this blog entry I have a bit of that first day back to school feeling. It's a mixture of uncertainty, excitement, and nervousness. Overall I'm happy to be back, and I have missed all my blogging friends and can't wait to hear what you have all been up to - at the same time though, it was really nice to have a break.

And I took a big break. Except for that one blog entry in December (which was really just an excuse to post pics of my children and then enjoy all the "oh, they're so cute" comments) I have been away from the blogopherse for over two months. So, now I need to get back into work mode and also find out what everyone else has been up to while I've been away.

And what have I been up to?

Well, I did finish those pesky revisions on my Urban Fantasy. I went right to the wire on that one, finishing it up a few days before I was scheduled to go into the hospital for my c-section.

More excitingly though, I have started on a new work in progress that is still in the "getting to know you" (bonus points if you read those words and immediately started singing the song from The King and I) phase. It is another Urban Fantasy, but this time it is also Young Adult. I am very very excited about this right now and am sure will be talking about it a lot more as it comes along.

I've also done mucho mucho mucho reading. And it's been wonderful. I have read so many books that I honestly can't remember all of them. The biggest highlight though was my discovery of Georgette Heyer. Her English Regency romance novels were published in the 1930's, so you would think that having been written nearly half a century ago - and the novels themselves taking place taking place another hundred years before then - that they would seem hopelessly dated. Except they don't.

I think her novels stay current because the relationships between the characters ring as true and touching and funny as they were when she first wrote them. So far I've read every one of her novels that they have at my local library - and I've even bought one. Yes, spending money on a book - not even second hand - that' s when you know I am serious. And I have plans to buy more.

I could go on and on about how funny these novels are - reading more like a comedy of manners at times - but if you are looking for something fun to read I urge you to check them out yourselves. My favorites so far have been Frederica, Devil's Cub, and The Grand Sophy.

And my last bit of news is the most exciting of all: I bought a new desk chair! Okay, so this news is more exciting for my butt than for anyone out there reading this, but I just had to share because A. the old chair was a broken-down hand-me-down that was excruciatingly uncomfortable to sit in, while the new chair is a really comfortable and cute little faux brown leather one and B. the money to buy the new chair came from selling another story to Woman's World magazine! And it's really cool to sit in my writing chair and know that the money to buy it came from my own writing.

Whooo. Okay, that wasn't so bad. Now I need to catch up with all of you - and all of your blogs... although that might be a bit more time consuming, but I am still looking forward to it! In the meantime, I'd love to hear the short version of what everyone is up to in the comments!
Posted by Kate Karyus Quinn at 2:11 PM 9 comments: